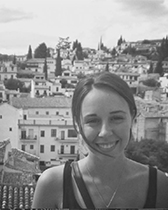 Caitlin is a PhD student specializing in Northern European visual culture of the later Middle Ages, with a focus on manuscripts and participatory devotional objects. She is particularly interested in the formation of identity and the intersections of gender, race, and religion in late medieval art. She received her Masters degree from the University of Texas at Austin, where she wrote a thesis on the representation of masculinity and kingship in the Treatise of Walter de Milemete. Caitlin has previously held internships at the Princeton University Art Museum, the Newark Museum, and the Martin Art Gallery at Muhlenberg College. She has presented her work at the annual International Congress on Medieval Studies at Kalamazoo and for the Medieval Studies Institute in Bloomington, Indiana.