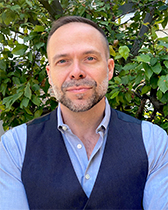 The Department of Art History at Northwestern taught me to follow ideas rather than preconceived categories, and the faculty demanded that we take responsibility for those ideas, prompting us to pursue their intellectual and political implications. I came to Northwestern from Oberlin College and was the first doctoral student in the department’s new “Theory and Interpretation” track in 1995. My intention was to work on contemporary art and queer theory, with a focus on Minimal and Postminimal sculpture. My advisor, Whitney Davis, urged me to get a grasp of the trajectory of sculpture theory of the modern period, and I started working through the origins of modern sculpture in nineteenth-century Germany, France, and then Britain. When I came to the British material, I encountered an episode comparable to Minimalism in which sculpture, for a time, took the lead as the central site of innovation. Ultimately, I focused my dissertation on this material, arguing that late-Victorian sculptors chose to retain verisimilitude but activate it through materiality and an attention to the bodily encounter with the viewer. My work since then has explored the implications of bodily, temporal, and spatial relations between sculptures and their viewers. While this started with an engagement with Minimalism and Postminimalism’s activation of the viewer’s share in the encounter, it then extended out to questions of how statues are corporeally present while also being three-dimensional images and, more recently, how sculptures evoke bodily associations even in high degrees of abstraction. For me, the complexity of the viewing encounter with sculpture (and all of its possibilities for the viewer’s independence and volition) connects up with how I understand queer and transgender theories as cultivating rogue engagements, self-determination, and alternate pathways of identification.

For the dissertation, I received a two-year Kress Fellowship at the Courtauld Institute of Art and, after completing the dissertation, a Postdoctoral Fellowship from the Paul Mellon Centre for Studies in British Art. My book based on this material, Body Doubles: Sculpture in Britain, 1877-1905, came out in 2004 with Yale University Press. In that same year, I brought together new approaches to British sculpture in an anthology titled Sculpture and the Pursuit of a Modern Ideal in Britain. I returned to the U.S. to take up a two-year postdoctoral fellowship with the Leslie Center for the Humanities at Dartmouth College followed by a year at Harvard University as a Getty Postdoctoral Fellow. During this time, I redirected my interests to questions of bodily interactivity in new media and focused my historical work on modern art in France. In 2005, I began the tenure-track at the School of the Art Institute of Chicago teaching nineteenth-century art (where I am now the Goldabelle McComb Finn Distinguished Professor of Art History). The research from these years manifested itself as two books. First, I published with Yale University Press in 2010 a book on Auguste Rodin titled Rodin: Sex and the Making of Modern Sculpture, in which I argue that Rodin’s famously sexualized artistic persona emerged from a reaction to Michelangelo’s homoeroticism and became embedded in his manipulation of nineteenth-century sculptural practices (and not just his subject matter). The second project was an anthology on game studies and modern art titled From Diversion to Subversion: Games, Play, and Twentieth-Century Art (Penn State University Press, 2011).

Since that time, I have shifted my attention to American art of the 1960s and 1970s, tracking episodes in which non-normative genders and sexualities have played constitutive (if suppressed) roles in art historical narratives. My 2015 book Abstract Bodies: Sixties Sculpture in the Expanded Field of Gender (Yale University Press) argued that debates around sculptural abstraction in the 1960s were tied up with arbitrations of gender’s multiplicity, non-dimorphism, and transformability. In addition to my work on art history and its methods, I also maintain a practice of writing about recent work of contemporary artists—especially those who work from queer, transgender, or feminist priorities. This work informed the anthology of artists’ writings on queer practice that I edited for MIT Press’s “Documents of Contemporary Art Book Series” (Queer, 2016) and a co-edited special issue of TSQ: Transgender Studies Quarterly (“Trans Cultural Production,” 2014). My most recent historical research undertakes archive-based recoveries of queer and transgender performance practices in New York in the 1970s, and this has resulted in the 2018 retrospective Rubbish and Dreams: The Genderqueer Performance Art of Stephen Varble (Leslie-Lohman Museum, New York) and a forthcoming book on Scott Burton’s queer performance art in the 1970s, for which I received the Senior Fellowship from the Dedalus Foundation.

I can trace my ability and interest in moving between subfields and exceeding narrow categorizations from my time at Northwestern, where we were encouraged to think broadly about how to pursue intellectual, ethical, and political priorities rather than be content with disciplinary divisions and pre-existing categorizations.