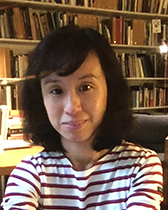 1) Could you tell us a little about yourself today?

I am associate professor of modern art at the University of Oregon where I have taught since 2009. I teach courses in late 19th-century and early 20th-century European art and cultural history, with an emphasis on the productions of avant-garde movements such as Symbolism, Dada and Surrealism. I was trained with historiography and critical theory as a secondary field, so I’m also invested in methodological issues in art history. I am especially interested in the anthropology of art, which also relates to the book I am currently finishing on the intersection of surrealism and ethnography in the interwar period.

2) What made you become an art history major?

As an interdisciplinary scholar with strong interest in poetics, philosophical aesthetics and cultural anthropology, majoring in art history seems to me the result of a happy accident. In retrospect, comparative literature, philosophy and anthropology would have been equally suitable majors. At the time of deciding on a major, which I knew was going to be a humanistic one, I was taking Hollis Clayson’s course on nineteenth-century French art and Michael Stone-Richards’ course on Symbolism and Dada. Both courses spoke to me but in different ways. If I had to articulate my feelings retrospectively, I suppose I was intrigued by the idea of art history as a discipline that drew as much from history as from philosophy. To me, those are still the two most important methodological points of reference as I teach and do research today; I think they should be compatible.

3) What experiences with art were most important to you as a student at NU?

It was wonderful to have the Art Institute of Chicago relatively nearby. I got to know certain objects in the 19th- and 20th-century collections like old friends; the Cézannes are simply superb. In class, we still had slides, which by today’s standards might seem pale. But that meant that there were fewer images shown in each class, so more time to look at each. I saw Paul Sérusier’s Talisman as a slide in Michael’s course Symbolism; my understanding of art was never the same again. I should also mention that, at the time when I was writing my B.A. thesis, the Department of Art History had funds to support undergraduate research. I received a generous scholarship that allowed me to travel to Paris to study the notebooks of the surrealist poet/writer Antonin Artaud, which was a powerful experience.

4) What did you do when you first graduated and how did it lead to where you are now?

I knew that I wanted to pursue graduate studies in art history already in my senior year as an undergraduate, and took seriously my professors’ recommendation that I develop strong skills in French and German as soon as possible. My gap year between graduation and grad school (Univ of Chicago) was spent learning German and strengthening my French, and, of course, applying for graduate schools. I was lucky to be able to do this with family support. As a Europeanist without European or Euro-American background, I felt additional psychological pressure to demonstrate linguistic competence, but I find languages to be important generally, not just for deciphering documents but for productive engagement with non-Anglophone scholarship. Without a gap year devoted to language studies, I might have still learned French but would probably not have the level to engage with Francophone scholars and researchers, of which I did a fair amount when back in France during my graduate studies.