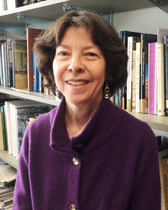 Ann C. Gunter's work addresses the visual and material cultural of the ancient Near East and its Eastern Mediterranean neighbors. Her primary research interests include artistic and cultural interaction between the Mediterranean and the Near East; the relationship between material culture and social and cultural identity; and the reception of ancient Greek and Near Eastern art in the nineteenth and twentieth centuries.

Regional Interests: Ancient Art 1500 BCE to 500 BCE, cultural and artistic interaction between the Mediterranean and ancient Near East

Ann Gunter, Greek Art and the Orient, (New York: Cambridge University Press, 2009).
Ann Gunter, "The Etruscans, Greek Art, and the Near East," A Companion to the Etruscans, eds. S. Bell and A. Carpino (Malden, MA: John Wiley & Sons, Inc., 2016): 339-52.
Ann Gunter, "Beyond 'Orientalizing': Encounters among Cultures in the Eastern Mediterranean," Assyria to Iberia at the Dawn of the Classical Age, eds. J. Aruz, S. B. Graff, and Y. Rakic (New York and New Haven: Metropolitan Museum of Art and Yale University Press, 2014): 258-53.
Ann Gunter, "Orientalism and Orientalization in the Iron Age Mediterranean," Critical Approaches to Ancient Near Eastern Art, eds. B. A. Brown and M. H. Feldman (Berlin: DeGruyter, 2014): 79-108.
Back to top