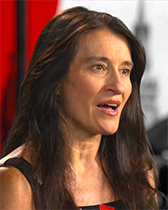 Christina Kiaer (Ph.D., University of California, Berkeley) teaches twentieth-century art, specializing in Russian and Soviet art, the politics of realism and the avant-garde, Comintern aesthetics, the visual culture of anti-racism, and feminist theory. Her first book Imagine No Possessions: The Socialist Objects of Russian Constructivism (MIT Press, 2005) was awarded an Honorable Mention by the Wayne S. Vucinich Prize of the American Association for the Advancement of Slavic Studies. That year she also published an interdisciplinary volume of essays on Soviet cultural history, co-edited with Eric Naiman, on Everyday Life in Early Soviet Russia: Taking the Revolution Inside (Indiana University Press). Her book Collective Body: Aleksandr Deineka at the Limit of Socialist Realism is forthcoming from the University of Chicago Press in Fall 2022. She is currently at work on the project “An Aesthetics of Anti-racism: African Americans in Soviet Visual Culture,” from which she has published several articles, including “Inventing an Aesthetics of Anti-Racism:African Americans in Early Soviet Visual Culture” in the forthcoming collection edited by Evgeniy Fiks, The Wayland Rudd Collection: Exploring Racial Imaginaries in Soviet Visual Culture (New York: Ugly Duckling Presse).

She appeared in the film Rouge! L’Art au Pays des Soviets (2019), which was broadcast on French television and screened during the run of the exhibition Rouge! Art et utopie au pays des Soviets at the Grand Palais, Par­­­is in Spring 2019. She was involved in two local 2017 exhibitions marking the 100th anniversary of the Russian Revolution. She was co-curator, with Robert Bird and Zachary Cahill, of Revolution Every Day at the Smart Museum, University of Chicago, and an editor of the catalog, Revolution Every Day: A Calendar (Milan: Mousse Publishing, with the Smart Museum of Art, 2017). She was also a consultant, member of the catalog collective and catalog essay writer for the exhibition Revoliutsiia! Demonstratsiia! Soviet Art Put to the Test at the Art Institute of Chicago. Previously, she served as consultant curator on the 2009 exhibition Rodchenko and Popova: Defining Constructivism at the Tate Modern Museum, London, and as a special advisor to the 2011 exhibition Aleksandr Deineka: An Avant-Garde for the Proletariat at the Fundación Juan March in Madrid.

She was the winner of a Weinberg College Research Innovation Grant (W Award) at Northwestern University in 2018 and has held postdoctoral research grants from the Alice Kaplan Institute for the Humanities, Northwestern University; the Institute for Advanced Study, Princeton; the American Philosophical Society; the Social Science Research Council; and the J. Paul Getty Foundation, among others. She will be a Visiting Professor at the Institute for Art and Cultural Studies at the University of Copenhagen in 2021-2022, sponsored by a grant from the Novo Nordisk Foundation.

Regional Interests: Twentieth-century art, specializing in Russian and Soviet art, the politics of realism and the avant-garde, the visual culture of anti-racism, and feminist theory and art

Revolution Every Day: A Calendar, co-edited with Robert Bird and Zachary Cahill (Milan: Mousse Publishing, with the Smart Museum of Art, 2017)