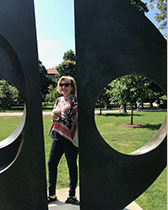 Hollis Clayson is a historian of modern art who specializes in 19th-century Europe, especially France, and transatlantic exchanges between France and the U.S. Her first book, Painted Love: Prostitution in French Art of the Impressionist Era, appeared in 1991 (Yale U. Press; reprinted by the Getty, 2003 and Getty Virtual Library, 2014). A co-edited thematic study of painting in the Western tradition, Understanding Paintings: Themes in Art Explored and Explained, came out in 2000, and has been translated into six other languages (Watson-Guptill Publications). Paris in Despair: Art and Everyday Life Under Siege (1870-71) was published in 2002 (U. of Chicago Press, paperback 2005). In 2013, she curated the exhibition ELECTRIC PARIS at the Clark Art Institute in Williamstown, MA. An expanded version of the exhibition was at the Bruce Museum of Art in Greenwich, CT during the spring and summer of 2016. Her co-edited book (with André Dombrowski), Is Paris Still the Capital of the Nineteenth Century? Essays on Art and Modernity, 1850-1900, appeared in 2016 (Routledge). Her new book, Illuminated Paris: Essays on Art and Lighting in the Belle Époque (U. of Chicago Press), appeared in 2019. Her current project is The Inescapability of the Eiffel Tower.

Her research has been supported by the American Council of Learned Societies, The Kaplan Center for the Humanities, the Getty Research Institute, the Clark Art Institute, the INHA in Paris, The Huntington Library, Columbia University Reid Hall in Paris, and CASVA. Her teaching has also been recognized. She won a WCAS Teaching Award (1987) as an Assistant Professor, was the first and only recipient of the College Art Association's Distinguished Teaching of Art History Award to a Junior Professor (1990), held a Charles Deering McCormick Professorship of Teaching Excellence (1993-96), was the Martin J. and Patricia Koldyke Outstanding Teaching Professor (2004-06), and received the Ver Steeg Award for Excellence in Graduate Student Advising (2016).

She was Robert Sterling Clark Visiting Professor in the Williams College Graduate Program in the History of Art in the fall of 2005. She was named Bergen Evans Professor in the Humanities at Northwestern in 2006, and served as the (founding) Director of the Alice Kaplan Institute for the Humanities from 2006 to 2013. In 2013-14, she was the Samuel H. Kress Professor in the Center for the Advanced Study of the Visual Arts (CASVA) at the National Gallery of Art. In early 2014, she was named a Chevalier in the Ordre des Palmes Académiques by the French Ministry of Culture. In fall of 2015, she was Kirk Varnedoe Visiting Professor at the Institute of Fine Arts, New York University. In 2017-18, she was Paul Mellon Visiting Senior Fellow at CASVA and chercheuse invitée at the INHA (Paris).

Regional Interests: The Social History of 19th-Century Art in the Era of the Material Turn; Visual Representation and Lighting Technologies; The Visual Culture of the Interior and the Threshold

"Invited or Rebuffed? Exploring the Effects of Early Impressionist Foregrounds." In Monet and the Birth of Impressionism, edited by Städel Museum, 46-53. New York: Presetel.

Illuminated Paris: Essays on Art and Lighting in the Belle Époque. Chicago: The University of Chicago Press, 2019.
Back to top