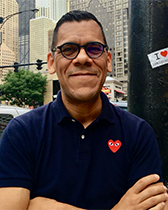 Jesús Escobar arrived at Northwestern in 2008 and chaired the Department of Art History for seven years between 2010 and 2018. He is a scholar of art, architecture, and urbanism in early modern Spain and the larger Spanish Habsburg world. His 2022 book, Habsburg Madrid: Architecture and the Spanish Monarchy (Penn State University Press), examines government buildings and public spaces built and shaped in the Spanish capital between 1620 and 1700 from local, regional, and global vantage points. The book complements The Plaza Mayor and the Shaping of Baroque Madrid (Cambridge University Press, 2003; paperback, 2009), Escobar’s exploration of the political and spatial evolution of Madrid from a secondary city of Castile to the seat of a global empire in the late sixteenth and early seventeenth centuries. The first book won the Eleanor Tufts Award from the American Society for Hispanic Art Historical Studies and was published in a Spanish-language edition in 2008 by Editorial Nerea. Other recent and ongoing projects consider the monastery-palace of El Escorial, transatlantic Renaissance and Baroque religious architecture in the Spanish Empire, and the historiography of seventeenth-century architecture in Spain. With Michael Schreffler of the University of Notre Dame, he is writing a broad survey titled Architecture of the Spanish World, 1500 to 1800, a book under contract with Princeton University Press.

Professor Escobar is Editor of the scholarly book series, Buildings, Landscapes, and Societies, published by Penn State University Press. He is also an editor for the Grove Encyclopedia of Latin American Art and Architecture, a member and Treasurer of the National Committee for the History of Art, and an active participant in several professional societies. His research has been supported by grants from the Fulbright Program, the National Endowment for the Humanities, and the Center for Advanced Study in the Visual Arts at the National Gallery of Art in Washington, D.C. At Northwestern, he is co-Principal Investigator for the Chicago Objects Study Initiative, a collaborative project with the Art Institute of Chicago and the University of Chicago funded by the Mellon Foundation.

In Fall 2022, Professor Escobar will teach Art and Architecture in Colonial Mexico (ART HIST 339), a course open to all undergraduate students. He will co-teach the Mellon Objects and Materials Seminar for first-year graduate students at the Art Institute of Chicago in Winter 2023. In the spring, Professor Escobar will offer a seminar, Mapping the Early Modern Spanish World, at the Newberry Library in Chicago which is open to graduate students from across the Newberry’s consortium of members. Professor Escobar looks forward to running the Senior Honors Thesis Colloquium and getting to know department majors and minors in his role as Director of Undergraduate Studies. He welcomes applications from prospective graduate students interested in architecture, urbanism, and cartography in early modern Spain and its transatlantic empire, as well as the study of architectural and artistic exchange across the Spanish Habsburg world.