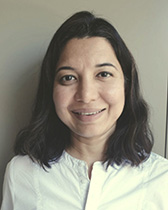 Yuthika Sharma works on the visual culture of South Asia in the early modern and colonial period. Her research spans a range of topics on colonialism, culture, gender and labour relations. Her publication emerging out of her dissertation research, Princes and Painters in Mughal Delhi 1707-1857 (co-authored with William Dalrymple, Yale University Press, 2013) focused on artistic identity and knowledge exchange in the long 18th century in Anglo-Mughal India. She has written on portraiture and the practice of proto-colonial survey strategies, the contested art history of ivory souvenirs as well as the role of ‘oriental’ commodities in the British domestic sphere. Dr Sharma has curated a number of exhibitions in the US and the UK and also worked at the British Museum and continues to engage with art historical pedagogy, collecting and curatorial practice. Her research has been supported by the Leverhulme Trust, The Arts and Humanities Research Council and the Paul Mellon Centre for British Art.

At present, she is writing on historiography and artistic knowledge in the long 18th century in South Asia before the rise of nationalism. A parallel project considers the repackaging of Mughal manuscripts for Scots in the East India Company and the role of local artists as tastemakers. A new project in development looks at domesticity and public life in 19th century popular culture through the lens of gender and labour relations.