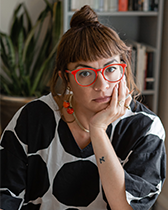 Ruslana Lichtzier is a curator, critic, and doctoral student in Art History at Northwestern as well as a Mellon fellow in MENA Studies, and in Critical Theory Studies. Born in Russia, raised in Israel, and residing today in the US, Lichtzier’s practice originates from the non-place of migration, a condition that bestows an ethical commitment to states of statelessness. Broadly, Lichtzier focuses on the optic regimes of domination that yield various performances of the non-citizenship in the Middle East. Her work is animated by the scholarship of Michel Foucault, the Frankfurt School, Feminist New Materialisms, and Black Studies. Recent curatorial projects include the group exhibitions An Echo, She Is (Chicago Manual Style, Chicago, IL), Four Flags Chicago (Chicago Manual Style, Chicago, IL (in collaboration with Stephanie Cristello)), The Dangerous Professors (Flatland Gallery,  Houston, TX (with the support of the Museum of Fine Arts, Houston)). Lichtzier has contributed to numerous exhibition catalogues and international art publications; her essays have appeared in English, Hebrew, Spanish, and Korean.