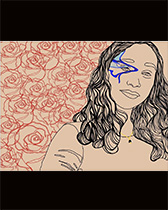 Sarah Estrela’s research focuses on the visual articulation (and suppression) of blackness in the art and urban planning history of Portugal and its former colonies (primarily Angola, Brazil, Cabo Verde, Goa, Macau, and Moçambique) in the 20th and 21st Centuries. She is also invested in intersectional methodologies of art history that engage with race, feminism and the transnational. She earned her BA at Wheaton College in MA, where she studied both Art History and English Literature. Sarah has interned and worked for the Rhode Island School of Design, the Wheaton College Beard & Weil Galleries, The Frick Collection, and The Museums of the University of Oxford. She studied abroad at Lady Margaret Hall at Oxford University 2013–14, is a 2014 Beinecke Scholar, is the recent recipient of the Pick-Laudati Fund for Arts Computing.