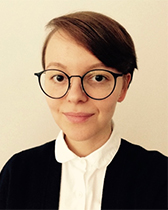 Sasha is a doctoral student studying modern and contemporary African-American and African Diaspora art at the Department of Art History at Northwestern University. She is particularly interested in the artistic exchange between African-American & African socialist artists and the Soviet Union during the Cold War. She graduated in 2012 with a Specialist Diploma from the Sociology Department at the Russian State University for the Humanities. In August 2019, Sasha received her MA in North American Studies from the John F. Kennedy Institute at Freie Universität in Berlin. Her thesis, The Representation of Black Romance in the Painting Series “Vignettes” by Kerry James Marshall, examined the history of visual representation of Black romance in European and North American visual culture. Specifically, Sasha’s research focused on the way Kerry James Marshall created a new canonical representation of Black heterosexual love in his on-going painting series “Vignettes.” Prior to her current studies, Sasha spent two years working in advertising and at the Educational Department of the Garage Museum of Contemporary Art in Moscow. Currently, she is a freelance contributor to the research project Art Market Dictionary for the German academic publishing house De Gruyter.