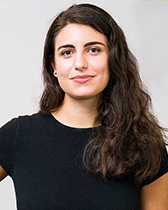 Alicia Caticha received her PhD from the University of Virginia. She specializes in eighteenth-century sculpture and decorative arts, with a particular focus on the intersection between Enlightenment aesthetic theory and artisanal production outside of the academic sphere. Her book project, tentatively titled “Sculpting Whiteness: Marble, Porcelain, and Sugar in Eighteenth-Century Paris,” takes up the career of the eighteenth-century French sculptor Étienne-Maurice Falconet and the replications and reverberations of his work in marble, porcelain, and sugar. The replication of whiteness throughout these ostensibly opposing media provides a case study through which to understand the rise of the classical marble ideal and its long-term aesthetic and racial implications. Caticha’s research has been supported by the Center for the Advanced Studies of the Visual Arts, the École normale supérieure, the Decorative Arts Trust, and the Newberry Library. Her other research and teaching interests include the broader relationship between popular culture and art history. She has published on this topic in Journal18, Eighteenth-Century Fiction, and American Quarterly.