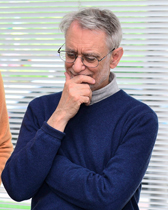 David Van Zanten taught courses in American and European architecture and urbanism after 1800. He has contributed to the exhibition catalogues The Architecture of the Ecole des Beaux-Arts (1975, 1977) and The Second Empire (1979-1980). His Designing Paris: The Architecture of Duban, Labrouste, Duc, and Vaudoyer won the 1988 Alice Davis Hitchcock Book Award from the Society of Architectural Historians. He extended this work in Building Paris: Architectural Institutions and the Transformation of the French Capital, 1830-1870 (Cambridge University Press, 1994). His book Sullivan's City: The Meaning of Ornament for Louis Sullivan was published by W. W. Norton in 2000. He pushed the issues broached there further in his contributions to the 2013 Block Museum exhibition Drawing the Future.

He has received a Guggenheim Fellowship (2001-02) to study the development of Paris, London, Vienna and Hamburg. Recently he held appointments at the Institut National d'Histoire de l'Art (2006) at the Ecole des Hautes Etudes en Sciences Sociales (2008), both in Paris. He will be retiring in the spring of 2018.